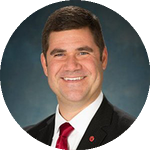 Ryan Zinn is a three-time Ohio State alumnus and technology integrator in the College of Engineering's Center for Design and Manufacturing Excellence. He received a heart transplant when he was just 15 years old, and is sharing his story as part of National Donate Life Month.

What led to you receiving a heart transplant at 15 years old?

I was perfectly healthy. That all changed the beginning of my freshman year. I was always very competitive in athletics, but I started to slow down while all my classmates were catching up. Looking back on it, that was likely when my heart was beginning to fail. It started at basketball practice when everything got really dark and really quiet as I was running sprints at the end of practice. It felt like I was going to pass out. I went to the doctor but they said everything looked okay. Then that Christmas I had heart palpitations. My heart was pounding because it just wasn’t able to work. We went to several doctors for answers and they said that my heart was enlarged but they weren’t sure why. So at 15 years old I started taking five or six heart pills a day. Then later that year I was at home and had a stroke in my kitchen. They rushed me to the hospital and I remember one of the scariest moments was when my dad came into the room and I couldn’t remember his name. I was taken to the Cleveland Clinic and doctors gave me two options: I could get on the transplant list for a new heart, or I could prepare to die in six months and just let that happen. So I got on the list and 17 days later I got the call. I was extremely fortunate, blessed, lucky – however you want to look at it. That was the beginning of my new life. That’s led me to where I am and who I am now.

How did receiving a transplant change your life?

My donor, James, was a 20-year-old college student who was killed in a car accident. Because of him and his gift of life I was able to compete in track again and set a school record with my relay team. I went on to achieve my goal of being class valedictorian. Because of my donor I was able to come to Ohio State and study mechanical engineering. In 1992, I started competing against other athletes from around the country in the Transplant Games of America and then went on to travel the world by competing in the World Transplant Games. Things just keep progressing because of James' gift of life and what my donor family was able to do in what were their darkest days. When my daughter was born in 2015, we named her Sylvia Rose James Zinn, to honor of the young man who gave me the gift of life.

I work with Lifeline of Ohio to raise awareness about organ and tissue donation. Right now more than 123,000 people in the U.S. are waiting for a life-saving transplant. I also take part in the national and world transplant games not only because I love to compete, but I also do it to raise awareness. We’re trying to promote the fact that lifesaving organ transplantation is a reality -- it works and it works really well! We have great stories about people persevering and having wonderful lives because of organ transplantation. So we’re trying to get the word out to everyone that organ and tissue donation and transplantation really works. It transforms lives. It saves lives. I’ll always do what I can to help share my story, because maybe it helps someone else who’s waiting, or their loved one is waiting or maybe they’re wondering whether they want to be a donor. I’ve had the good fortune of being told several times by people that they were never signed up to be an organ donor, but now that they’ve heard my story, they signed up. I mean, how great is that? That’s why I tell my story. 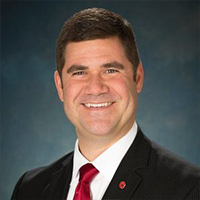