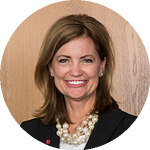 Hospitals work to ensure patients’ health. A hospital’s chief strategy officer works to ensure that hospital’s health. That is just what Gail Marsh has done for The Ohio State University Wexner Medical Center, where she serves as senior associate vice president. Since 2002 Marsh has developed and executed the medical center’s strategic plan, taking it from a $500 million enterprise to a $2 billion organization. In turn, that has meant significant central Ohio job growth and economic impact.

Beyond the budgets, plans and building, Marsh’s focus is on ensuring Ohioans have access to health care in their communities, and empowering women to achieve their own goals. She was named one of the Most Powerful and Influential Women in Ohio at the 2012 Ohio Diversity and Leadership Conference.

The Chlois G. Ingram Spirit of Women Park was recreated in 2015. Can you describe your role in that?

“So when it was first created, what we wanted was a place where people could honor the special women in their lives. We didn’t want to lose that when we were building the new expansion of the critical care tower in the new James Hospital, and yet what we (had) created were tiles. Back then they were tiles that you could paint to honor your mother, your sister, an important teacher, someone in your church, some woman that was important in your life, and then people gave a small donation, and the Ingrams gave some money so we could make it a park. And because these tiles were just regular tiles, when you went to take them off they would crumble. A lot of people just wanted to tear the tiles down and be done with it. And I’m like, that is not OK. These people, and the Ingrams especially, these people did this knowing that the memory of their mother, sister, daughter, whatever, would be here forever. We have to spend the money to make it happen. So I had some partners here; I don’t do anything alone. What we did was we took pictures of all of (the tiles) and then paid to have them recreated in glass and then put them in a fountain out there. It’s just a special place. It’s not about all the things we talk about with women all the time, equal pay and serving on boards; it’s not about that. It’s about special women in our lives. And I love it. I think it will be there forever.”

How did you come to participate in Rep. Joyce Beatty’s 2014 Congressional Women’s Fly-In?

“This is when Obama was the president and (Beatty) was in a room reviewing his State of the Union Address, and she suggested in the room with the speechwriters and him there that — he was talking about women — and she said, you know what, when women succeed, America succeeds. And he took that, and he put it in his State of the Union Address. And then she wanted to follow up on that. So she invited all of the congresswomen and the senators in and then invited a bunch of us to go there; we talked with folks at the White House about women’s issues like minimum wage. The issue that I talked about was access to health care …  The infant mortality rate here is still very bad. No matter how much money and people and time we’re putting into it, it’s getting worse, it’s not getting better.  So what we talked about was what are some of the policies, what are some of the issues for the federal government to help with that infant mortality issue.”

Please explain why empowering women and eliminating racism are two important causes for you.

“I think a lot of people’s viewpoints aren’t heard, whether that’s women, whether that’s minorities. Whatever it is, I want everybody’s viewpoint heard. Then we all get to decide in the end. How we vote, or how we act, or what our value system is, but let’s hear what people have to say.”

Do you have any advice for women trying to advance in their fields, perhaps to leadership positions?

“You’ve got to be stellar at what you do. You can’t give it half effort and expect that people will say to you, ‘you know, why don’t you have work-life balance,’ because if the first thing they have to talk to you about is your performance, there’s no discussion about the other issues about how you’re balancing your life, and your family, or whatever it is. Second, you want to look for an environment that actually values this whole issue of balance; it’s really being happy in your personal life so you can be happy in your work life, because it really all kind of flows together. If you work for people that are like, ‘it’s eight o’clock on Monday morning and I don’t see her car in the parking garage,’ you’re just going to be miserable. Then third, I would say, you know everybody wants a mentor, right? You don’t want one mentor. You want four or five, because if you only have one, then it’s just that person’s opinion you’re getting.” 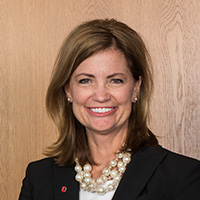 Marsh is chief strategy officer for the Wexner Medical Center. In addition to guiding the medical center’s strategic plan, she serves as part of a bi-partisan congressional group focusing on issues impacting women and minorities in Washington D.C.